Three Things You Need To Know About Good Omens

There’s been a lot of hype, and a lot of mixed reactions to Neil Gaiman’s five-part mini-series, Good Omens, based on the book he wrote with Terry Pratchett which was published back in 1990 by Ace Books. The mini-series came out just a few months ago in 2019, on Amazon Prime.

Before I dig into this review/theological reflection, let me share my own bias with you because, really, it wouldn’t be fair if I didn’t. Also, this theological review contains spoilers. If you don’t want to know how the world was saved while you weren’t looking, you probably should go read the book first. Also, I gain nothing from writing this review – I’m just doing it because it needed to be done.

Bias Number One: I’m a member of Generation X, which means that I can very easily code switch, bridge between two different ideas, or if you like, believe eight contradictory things before second breakfast.

Bias Number Two: I’m a Christian priest who has done multiple exorcisms. I’m fully conversant in supernatural beings, as it happens. Personally I don’t see it as a war between good and evil, I see it as a rescue mission. Don’t worry. We’re all getting out of here alive. Metaphorically speaking.

Now, Bias Number Two might make me seem as if I am a conservative Christian, but read on…

Bias Number Three: I do not (notnotnotnotnot) believe in biblical inerrancy. Does the bible have everything one might need for salvation? I can buy that. And I’ve taken oaths to that effect. Does it also have a lot of confusing, misguiding, and downright bizarre shit in it? You betcha, baby! Who says biblical scholarship isn’t just one Indiana Jones-style adventure after another? Go in with a team, a satellite phone, a back-up plan, and an automatic intervention mission to be triggered if you aren’t heard from for a week, and/or start spouting hate-filled babble. And that’s just for cracking the spine on Genesis, yo.

And so you can see that I’m more of a progressive Christian… except that I take religion a lot less seriously than your average priest, conservative or progressive.

And so we continue with the blogpost.

Good Omens: A Story About Creation 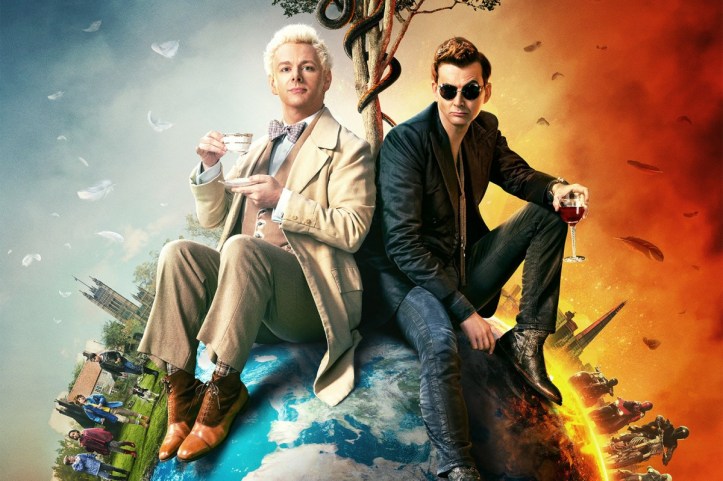 The first thing you need to know about this story – for let us consider both the book and the mini-series, as each one illuminates the other – is that this is a story about All That Is. And our storytellers (since there were two working collaboratively on the book and one since died and couldn’t work on the mini-series, this is now their collective title) are setting their story within the beautiful confines of a strictly conservative interpretation of a Christian Cosmos.

As a storyteller myself, this is familiar. When you set yourself strict boundaries and have to work within them, there is a certain challenge, a certain thrill. Can you convey the story you want to tell in only 100 words? In only 10 minutes? Using only a certain setting? How good a storyteller are you?

Now, our storytellers have each written myriad of other books in which they have excelled at just such challenges.

Our storytellers here are very good.

So this story is set in Creation as I have just described. So what? Well, part of the joy of having boundaries is to poke at them. Take what people consuming the story have already assumed is now true about the universe in which the story is set and poke holes in all of those assumptions. There are several clear examples of this and one particularly opaque one, unless you watch the mini-series with the closed captioning on.

Opaque example? God is narrating the entire story. This is made clear if you have the closed captioning on during the mini-series, because each time the female actor in question does a narration voice over her lines are labeled, ‘[GOD]’. So, the one who knows all, sees all, and debatably loves all is the one telling you this story. Deus is clearly not ex machina, here. And again, we are led to ask the question, ‘are the storytellers just fucking with us, or is there some bigger, more beautiful picture?’

In the end, what we see in the movie is that (in the words of God Godself), from the outside perspective, it seems like God isn’t playing dice with the Universe. It seems like God is playing “an obscure and complex version of poker in a pitch-dark room, with blank cards, for infinite stakes, with a Dealer who won’t tell you the rules, and who smiles all the time.”  [emphasis original, p4 of my copy of Good Omens]. And the story of Good Omens chronicles a few handfuls of characters – children, adults, angels, demons, witches, witch hunters, satanists, politicians, and a few anthropomorphic personifications (and a dog) who start to learn some of the rules of that not-actually-poker game in which they find themselves.

And some even learn that, actually, the deck is stacked for us all, not against us, and it always was.

Good Omens: A Story About The Created

A major question that comes up in the story is that of nature-vs-nurture, except the story turns that on it’s head and adds a third option. (Of course it does.) Choice.

What matters the most?

Some angels act as terrible and troubling as demons in the story. One demon acts as caring and compassionate as an angel. And sure, this gives conservative Christians acid reflux, but let’s consider a deeper point here, that is played out on this epic, supernatural stage, but that has ramifications for the average joe:

And so we see that even angels and demons in this story still have the capacity for choice, and they do choose. (Rationally speaking, this has internal consistency; if demons made a choice to abandon being angels, they could continue on making choices. Likewise angels who chose to remain angels must continue to make such choices.) And we also see that once you have made a big choice, it is hard to go back and there are consequences… but it is not impossible.

And this is what played out all throughout the story – people of one nature/nurture or another had made choices in their lives… and then they decided to change them. Sure, the big ticket versions of this in the story involve an angel and demon who defy each of their camps in order to save the world, and an eleven year-old antichrist (who is, as you might imagine, something of a charismatic hellion) who exorcises Satan through sheer, unmitigated truth-telling, at which eleven year-olds do excel. But it’s present in the supporting characters as well.

And arguably, only two characters in the entire story have a nature that is inherently evil – the antichrist and his hellhound. (Arguably because sure we could argue about this, but for the moment, let’s refrain.) And we see each of those naturally-evil characters have others nurture them in positive and neutral ways. For the antichrist, it’s his flesh-and-blood parents who, bless them, are doing the best they can. In the case of the hellhound, interestingly, it is the antichrist who requires that his hellhound be a normal, kind, obedient, loving dog, and that said hellhound go into sanctified spaces.

And each of those naturally-evil characters has a moment where they individually have to make their own choice to side with the insanity of evil, or the sanity of righteousness. Yes, the dog makes this choice well and on it’s own and it’s a very obvious choice that has been made, and eventually (after an ::ahem:: come to Jesus from his friends) so does the antichrist.

Good Omens is a story about how our choices enslave us, and our choices will set us free.

Good Omens: A Story About God

This is what the Kingdom of Heaven is like: When a demon is persuaded to choose again, and when an angel is good enough to see the good in everyone (even a demon) their friendship will be strong enough to thwart the misguided attempts of everyone bent on destroying the world in the name of God.

And let us be clear:

Gabriel is a stand in. There are plenty of men and women in this world, right now, who deeply believe that they understand perfectly the mind of God and further, that God requires of them the destruction and downfall of some group of people who presumably stand in God’s way.

Beelzebub is a stand in. There are plenty of men and women in this world, right now, who deeply believe that they understand perfectly the best way forward, and that they must achieve their ends no matter the consequences to others, preferably while killing off all who disagree.

[FANGIRL ALERT: INEFFABLE IS ONE OF MY FAVORITE SEMINARY WORDS! AND I HEARD IT OUT OF AN A-LIST ACTOR’S MOUTH WHILE NOT PERFORMING SHAKESPEARE! SQUEEEEEE!] ::ahem::

God’s plan is ineffable, which means inherently unknowable, and that is a part of the story of Good Omens which is entirely, completely, and utterly theologically sound. It is exact. It is a fine replica of the reality that any Christian, conservative or progressive, orthodox or catholic could agree to.

…Which is why Jesus spoke in parables and stories and said what God and living with God was like without saying what it actually was.  And if you’re Jesus, looking optimistically at God and possibly even understanding the ineffable, but totally unable to explain it to anyone else without getting immediately killed, then you speak in parable, metaphor, simile, and to those not your followers, out-and-out riddle.

If you are capable of taking yourself and your world not quite so seriously all the time, then I highly recommend this book and this mini-series. If you’re not, it’s probably not for you.

Me? I give it five stars. It was a joy to read, a joy to watch, and a joy to discuss ad nauseam with anyone willing to listen. Further, I feel like a better person for having consumed it. Thank you Neil Gaiman. Thank you Terry Pratchett.